So you’ve got a kick-ass idea and you’re looking for a way of powering it. As you’re using a microcontroller that’s capable of operation at 5V, you decide the no-brainer approach is to use a standard USB socket, paired with a USB2.0 compatible mains adapter that should theoretically be capable of supplying up to 500mA at a smooth consistent 5V - all whilst providing isolation and protection from the mains.

Well, I’m here to be the eternal pessimist and rain on your parade! The quality of many cheaper USB adapters is… shocking 🥁. Hackaday has previously written about the dangers of cheap USB adapters - and it’s pretty well known that they can be plagued with flaws. There’s also been some extensive teardowns and comparisons done which highlight the various deviations that are found from the official USB spec.

If something as simple as utilising the 5V input of a USB plug can be fraught with potential dangers, how exactly can we design against the most common faults: overcurrent and overvoltage?

So lets queue up Billy Joel’s “We didnt start the fire” and look at the most obvious form of protection: the humble fuse. There’s not a great deal that needs to be said here - the fuse goes in series with the load, and is located high-side (i.e. on the positive power rail).

Despite coming in different packages - such as automotive blades or glass tubes - the operation of a fuse tends to be simple: the internal wire element of the fuse only tolerates a specified current, when that current limit is breached it will burn out and open the circuit1.

The obvious consideration when selecting a suitable fuse is the current rating - how much current can the fuse take before it fails and opens the circuit? This can be relatively simple to work out - either mathematically by summing the current demands of individual components in various states, or by simply measuring the current during real usage during prototyping.

There are some other - more subtle - properties to think about though:

In addition to components being damaged by overcurrent, we also need to factor in the risk of overvoltage occuring if the power supply enters a fault scenario. Having previously mentioned the concerns around cheaper USB adapters, it’s good to take quite a “defensive” approach to any input voltage.

This is the “Crowbar” - a simple circuit that, in conjunction with a suitable fuse, disables the circuit if an unexpected voltage increase occurs: 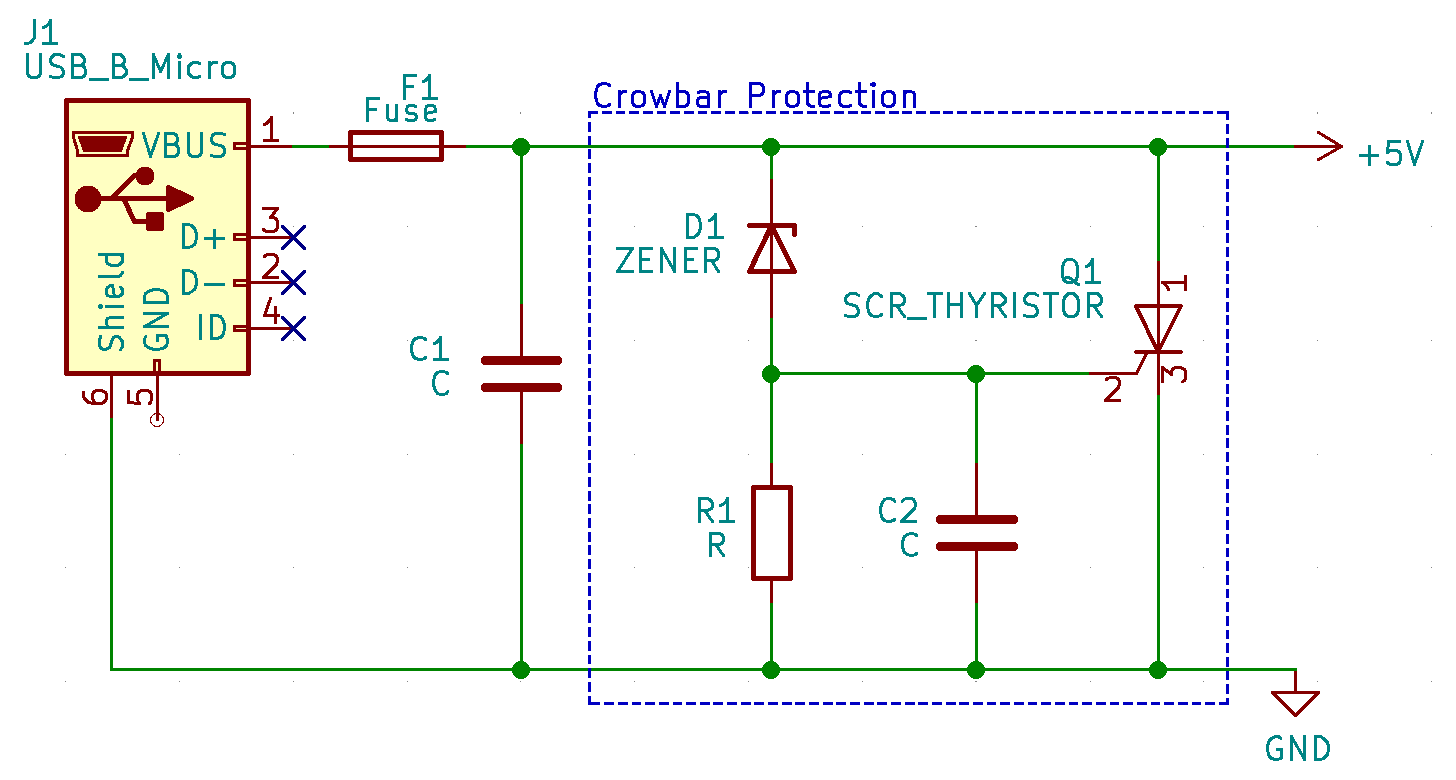 The functionality is relatively simple: when the input voltage (Vin) has a potential greater than the breakdown voltage (Vz) of the zener diode, it triggers the thyristor to open a new low-resistance path between Vin and GND. Sounds familiar? It should, because that’s essentially the definition of a short-circuit!

This short in our circuit rapidly increases the current draw on our supply line, until finally the fuse blows - disabling our circuit. At first it may seem counterintuitive to purposefully introduce an overcurrent fault - and thus blow the protective fuse, but in reality it provides a very simple mechanism that also utilises an existing protective component (the fuse).

Disclaimer: There's a lot of poor - bordering on dangerous - information online with regards to electronics. From infuriating schematics where the maths doesn't add up, to dangerous interfaces that risk component damage or even hazards like shocks and fires. And I'd hate to add to this mess.

That's why this disclaimer is on all my posts tagged "electronics"; although there's really little in the way of "original" or "novel" ideas, I can be more than a little absent-minded! Please email me if you have any concerns with the technicalities of what I've written, and I'll ensure it's updated in a timely manner.